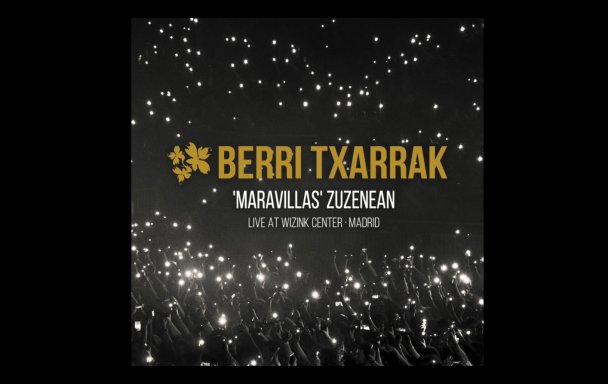 We want to share this version of "MARAVILLAS", with Gorka Urbizu on vocals and guitar. Recorded 5 months ago during the live show that Berri Txarrak starred at the WiZink Center in Madrid. And why this? For something that we have not told you until now, and we already want to start sharing. During that concert and during practically the entire tour that the legendary group of Lekumberri carried out throughout 2019, on the occasion of their farewell as a musical formation, ARENA comunicación audiovisual was accompanying them wherever they went; in order to shoot a documentary feature film that, although the winds lately have not been blowing very favorably, will be released this 2020. The #IkusiArteTour2019 took us to places such as Tokyo, Mexico, Madrid, Los Angeles, Berlin, San Sebastián, Bilbao, Barcelona and of course Pamplona, ​​during that unforgettable November 23. Marina Lameiro, director of the film, dives into that universe that unites the public and the band, inquiring about the integrating power of music, its personal and universal value, the coming and going of its lyrics and melodies from the intimate to the common , and the journey and the ins and outs of the farewell tour of a band with 25 years of history. Right now we are in the wonderful phase of assembling a puzzle, assembling the more than 40 hours of material shot, to move on shortly to the final post-production make-up, just before jumping on stage. The film is co-produced by ARENA comunicación audiovisual with #TxalapArt and #OnlyinDreams. And it has the support of Etxepare Euskal Institutua and the #InnovaCultural program, thanking them for their help, and hoping that other collaborations will soon join. Stay Tuned!!